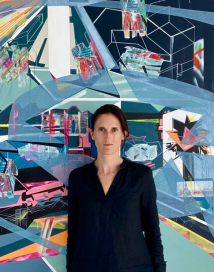 My work is defined by research and observation to acknowledge the functionality of our societies. Fueled by my studies in Law at the University of Paris Assas, and Art at the Ecole du Louvre, I focus my interest on a wide range of geopolitical, economic, and financial matters and their existence through algorithms. I translate them into a metaphoric vision to extract the very sense of our societies' structural balance. My goal is to lead people to a new observation of their environment by triggering a questioning reflection. I want to develop intellectual and visual connections towards people to nourish their need to discover their surroundings' future.

I develop my thematics around paintings, videos, and installations to give various perceptions of my subject matters. I examine my topics through a structural mind's eye to show how the ludicrous algorithmic complexity affects societies. The paintings are made of layers of acrylic paint, drawings, and collages extracted from research to establish my thematics' architecture. I then create installations to give a physical dimension of the algorithmic systems and to highlight their magnitude.

Through the visual sensory of my paintings and installations, I want to work up our societal environment's intricacy by focusing on its workings and trigger the emotions for its better understanding.

Society is an intricate monster. You need to tame it if you want to survive it.

In my new series, I introduce how algorithms, within the aim of societal optimization and economic productivity, redesign our environment. I create futuristic architectures of cities, borders, and private spaces modeled by algorithms to envision our structural future's multiple layers.
The paintings present the thematics of housing, immigration, transportation, and consciousness to create a visual connection and a questioning reflection.